Announcing a benefit & a new Bathyscaphe!

LE BATHYSCAPHE 9 arrived at the arbour!

We just received our ninth issue and are getting ready to celebrate!

Now, as always, LE BATHYSCAPHE is published without grants or publicity: you are the only propeller!
Come and party with us on sunday may 12th 2013 at Sala Rossa in Montreal, you won't regret it!

At the end of the evening, the craziest dj's around : ROYAL AIR TOGO will take possession of your bodies and souls.

All this for a mere 15 dollars that will keep LE BATHYSCAPHE out of trouble and in deep waters for a few years.

Read what Emily Raine of CULT MTL has to say about LE BATHYSCAPHE and this benefit party : here.

Issue number 9 will be available at a special price on that evening. Rare posters from Julie Doucet and Simon Bossé will be on sale. Amongst the many contributors of new issue 9 are Romy Ashby, Tosh Berman, Geneviève Castrée, Maïcke Castegnier, Benoît Chaput, Kerri Culhane, Byron Coley, Marci Denesiuk, Thierry Horguelin, Thurston Moore, Hermine Ortega, Antoine Peuchmaurd, Valerie Webber...  More infos right here soon on the content of this issue. Le Bathyscaphe is available at Feeding Tube records in Northampton and in many stores in Montreal, Québec city, Bruxelles, Liège, Paris, Bordeaux, Marseille. Also online at inkpusher.com. Website :  http://bathyscapheenglish.blogspot.ca
Posted by The crew at 12:57 No comments:

Article by Emily Raine, in Cult Mtl, on may 10 2013
Le Bathyscaphe
“We’re really at the crossroads between Europe and the USA and English Canada. And I think we need more things where we show that,” says Benoît Chaput, one of Le Bathyscaphe’s five editors. “With Le Bathyscaphe, we’re trying to really have this spirit of Montreal, a place where you can express yourself in English and French. And both cultural worlds are interesting, and whichever community you’re a part of, you should be interested in the other.”
We’re talking about the bilingual cultural paper he co-founded, which boasts an impressive roster of contributors, including regular columns by Byron Coley and Thurston Moore, wickedly funny and smart sex editorials by Valerie Webber and numerous explorations of the intersections between the worlds of art, music, poetry and space.
Each author writes in their preferred language, English or French. “There’s more and more people able to speak both languages,” he says. “I’ve been witnessing [this] since the ’80s in the community, and there’s more and more anglophones that actually speak French. This is very interesting, and I think it’s one of the strengths of Montreal.”
Le Bathyscaphe, he reveals, is all about translating different cultures to one another. “It’s really a friend thing that sort of evolved, since we’re all from different cultures, different generations and have a different approach, and we thought we should have a paper where you feel this thing, that we could talk about all these things from different points of view. What we really wanted was a paper that doesn’t talk about cultural actualities; we didn’t want to sell new cultural stuff. We wanted to do something where we talk about what matters to us, and it could reference stuff from 20 years ago or from last week as we please, not selling the new album that just came out.”
Le Bathyscaphe, which won best francophone zine for its latest issue at Expozine 2012, launches its ninth edition this Sunday, at a party and fundraiser at Sala featuring a full slate of readings and performances of all kinds, including readings from Byron Coley, Gabe Levine and Charles Plymell. The new issue promises a series of pieces about the “psycho-geography” of Mexico, an article about recently rediscovered street photographer Vivian Maier, a feature by LA Francophile Tosh Berman about Michel Legrand and an essay by Romy Ashby on the privatization of New York City’s libraries, while artist and musician Geneviève Castrée writes about the difficulties of living in rural America as a non-driver, and Webber’s sex column takes on the thorny issue of consent. In short, it’s all pretty interesting stuff, and it’s all over the cultural map.
Chaput also runs the French-language poetry press l’Oie de Cravan, which is partly what inspired the decision to found Le Bathyscaphe. “I started publishing poetry 20 years ago, and I was very interested in publishing not only books of poems but also other things that I found very poetical, personally, such as drawings, sort of poetical comics. But I’ve also been a lot into the music scene, and I started to publish books by musicians like Mike Watt, and then I published this book by Byron Coley,” he says. These cross-genre explorations, he explains, “have always been part of my life and my way of publishing.
“We’re trying to be a little bit international in a way. It’s in English and French, so everybody writes in their own language, and part of our public can’t read all the paper. It’s a very Montreal thing.” ■
Le Bathyscaphe launch party for issue #9 and fundraiser takes place Sunday, May 12, with readings by Byron Coley accompanied by Bill Nace, Charles Plymell accompanied by Mauro Pezzente, Gabe Levine, Urbain Desbois, music by Le Clou de la Gang, Kill Chicago and Myriam and Laurence Gendron and a DJ set by Royal Air Togo, La Sala Rossa (4848 St-Laurent), 6 p.m., $15
Posted by The crew at 17:35 No comments:

HURRAY FOR THE UNDERWATER UNDERGROUND!

We are very proud to announce that LE BATHYSCPAPHE won the prestigious EXPOZINE AWARD for best fanzine for its latest, november 2012, 8th issue! The jury wrote that LE BATHYSCAPHE won " For the general quality of the publication, the perfect layout, the excellent quality of the articles. The existence of such a paper is a necessity. Long live Le Bathyscaphe!"
To assure a long life to our publication, we are preparing a beautiful benefit festival that will take place at Sala Rossa in Montreal on may 12th 2013.  More news soon, right here! 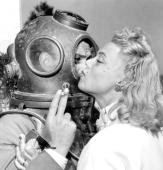 
Again, it took a year : that is a long time for a paper that comes out may times a year. But here it is at last : Bathyscaphe issue number 8!

will tell you everything about 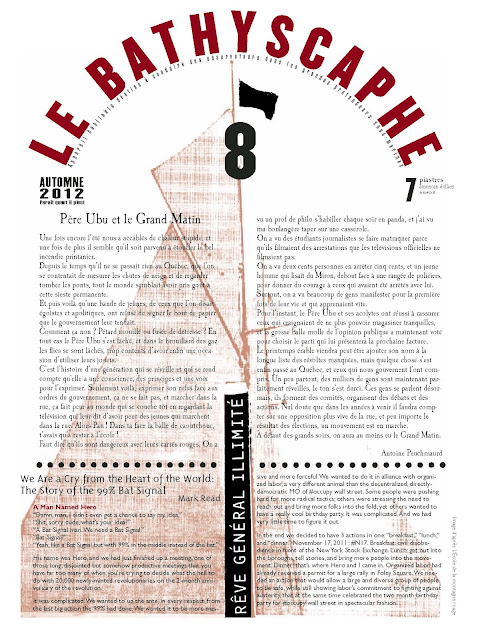 LE BATHYSCAPHE iS A SHIP
RUNNING WITHOUT PUBLICITY OR GRANTS!
YOU ARE THE SOLE FUEL PROVIDER TO OUR ENGINES !
FROM NEW YORK CITY TO LIÈGE OUR TEAM IS INTERNATIONAL
OUR LANGUAGES ARE FRENCH AND ENGLISH

Subscribe right now to receive the 4 next issues to your door.
It's easy, simply send 25 dollars to Le Bathyscaphe,
5545 rue Saint-Dominique, Montreal, Quebec, Canada, H2T 1V5
and the postal service will do the rest!

You can buy us online at INK PUSHER,
in a lot of bookstores in Montreal, through the province of Quebec, in Belgium and France,
and  at Feeding Tube records in Northampton, Mass.
Posted by The crew at 23:58 No comments:

BATHYSCAPHE SEVEN IS IN THE HARBOUR 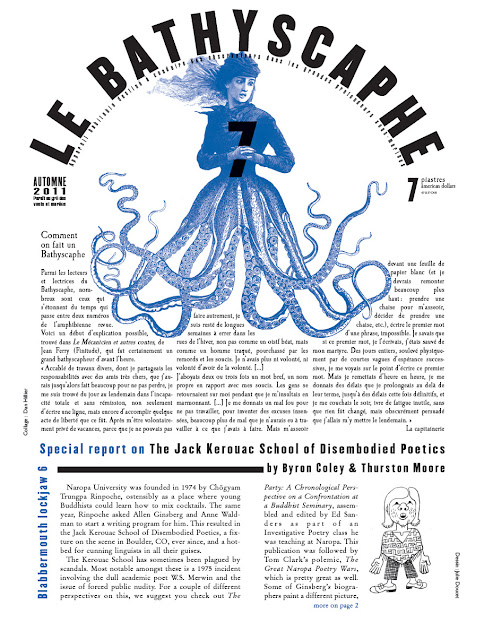 Launched next sunday, september 18th, with drinks and cheers at the famous Port de tête bookstore at 262 Mont-Royal east in Montreal. Starts at five for the sunday strollers.
The new issue of Julie Doucet's DER STEIN will also be launched
along with a brand new L'Oie de Cravan book on crazy typography! 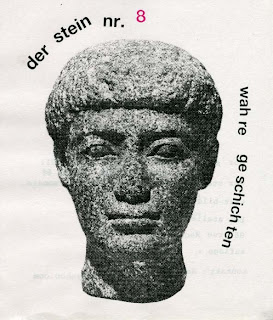 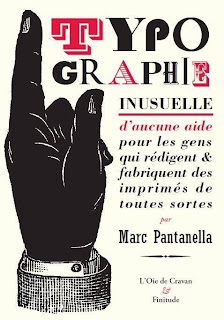 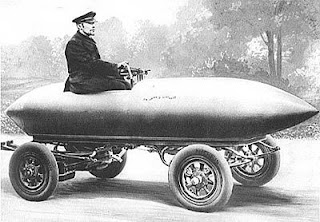 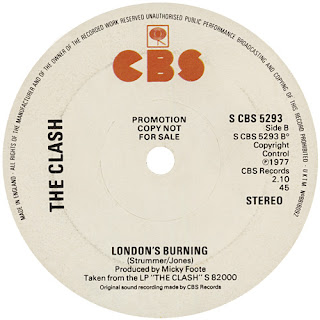 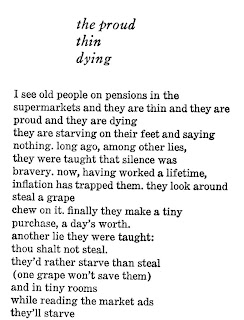 A navigable submersible for deep-sea exploration

Finally an expensive luxury paper for people with no interest in the news! 7 dollars or 7 euros for 20 pages of cultural drifting in french and english.
With French as its main language and English being obviously very present, Montreal is in many ways at the crossroads of the american and european world.
This situation is at the core of the Bathyscaphe project. With correspondents in Toronto, Quebec city, New york, Liege, Paris and Marseille, we try to make the best of our position.
A bilingual slow cultural paper, Le Bathyscaphe is all about that drift on invisible underwater currents.
OUR FRENCH BLOG IS HERE

Where to find us

Actual paper issues are for sale on line here : http://shop.inkpusher.com/
You can also find us in these splendid cities around the world
In Northampton (Massachusetts) :
Feeding Tube Records
90 King St. Northampton
Ma 01060 USA
In Montreal :
Librairie Gallimard
3700 Saint-Laurent